Had to run errands all morning today, and the 40m band was cranking but I had to miss it.  That's the way the cookie crumbles sometimes.  I did manage to get on the air later in the afternoon, the band was not too hot but I was able to hear a few signals.  I managed to work Jeff KB3ZUK out in Maryland, which is number 28 in the log!  Jeff is new to CW and his fist was sure and steady.  He asked me to QRS and of course I did but sending slow on a straight key is a exercise in hand to wrist dexterity...indeed.  Jeff was also working from park KFF-1573 in the Worldwide Flora and Fauna effort.  That's pretty cool!  Jeff is also a three time Police Chief in the state of Maryland, and has recently retired.  He's also the Region 3 Call Manager for the WWFF and is a ARRL and Laurel VE.  The QSB was horrid and my RST was a 359...I sent Jeff a 569 and my SKCC number and he sent me his back.  It always feels great to get a new one and color in another state.

I have asked the guys that are participating in this WAS challenge if we might open it to 20m and 40m both.  I'm waiting to see what they say.  Ivin W9ILF is running 1.5w from his Indiana QTH, Ron WB1GHA is running a HW8 from MA, and Wayne AC9HP is running JT65 at 1.5 watts from his Elecraft K3S in Avon Indiana.   I think as of today Wayne is leading...with 30 states.

So the mail man did not let me down today.  I got a new QSL card from Dave KB3MOW out in Pennsylvania.  We worked each other on St. Patricks Day! 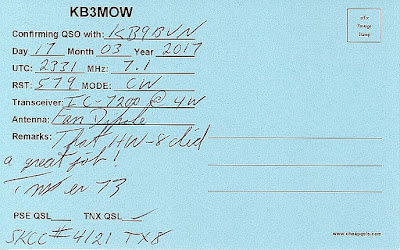 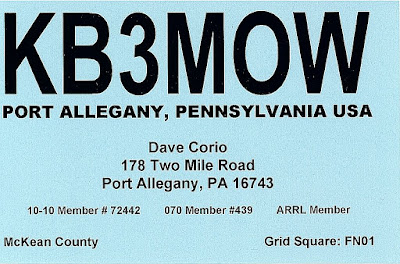 That's it for today...might try to get back on later tonight but I never know who is going to drop in on a Saturday night.  MeTV is showing Dracula tonight on the Svengoolie Show...I never miss Svengoolie.

Posted by Brian KB9BVN at 6:19 PM
Email ThisBlogThis!Share to TwitterShare to FacebookShare to Pinterest