Four Days in May is Virtual and Taking Registrations Now!

It's time to register for FDIM 2021, you do not want to miss out on our first ever virtual FDIM. Registration Link is found by going to https://qrparci.org on the front page.

The line up this year includes:

Dr. Jack Purdum W8TEE - How to Select a Microcontroller for a QRP Project

Ashhar Farhan VU2ESE - sBITX - An Open Source SDR that YOU can hack!

There will also be evening sessions with the authors, and vendors.  Registration is $10.00, then one week before the event you will receive a link to the event and a link to a PDF of the Proceedings Book. Please register as soon as you can so we have some idea of headcount. Also, registrants will be eligible to win fabulous and certainly valuable door prizes, like always! You do not need to be present to win but you DO need to be registered.

Printed copies of the Proceedings Book will be sold through the QRP-ARCI Toystore for $15 a copy. If you can not attend, the book is a great way to catch up on the presentations from this Virtual FDIM.

Book sales to US Customers Only, DX customers purchase through the Toy Store after 5/20/21.

Posted by Brian KB9BVN at 8:15 AM No comments:
Email ThisBlogThis!Share to TwitterShare to FacebookShare to Pinterest

So GOOD to be back in the Park!

Here it is the 8th of  March, our first day when the temperature broke 60F.  Hard to believe that just over two weeks ago we had ten inches of snow on the ground and temperatures hovering near zero.  So as soon as I got off work I headed to the Atterbury Fish and Wildlife Area in southern Johnson County.
I arrived at the AFWA around 4:15PM, and it took me about fifteen minutes to get the Eagle One up in the air, the coax run, and my K2 setup for POTA activation.  I setup two memories in the radio. One that sends CQ POTA DE KB9BVN, and one that sends CQ POTA K4183 DE KB9BVN.  When I am calling CQ I try tio send the one with the pak number in it at least every 4 or 5 CQs.  I also spotted myself on the POTA spotting page from my smartphone.
Luckily there is a state DNR office on the property so they have pretty good internet access in most of the place. I decided to start out on 20m, so I tuned to 14062 and started calling CQ.  On the first round I was answered by AB6QM from California, which made me very happy and hopeful 20m might be open to other far away places like Alaska and Hawaii, especially since I still need those two for my latest WAS efforts.  Alas he was my only 20m contact tonight.
So I moved down to 30m on 10121 and 10123 and managed about 4 more contacts in about 20 minutes.  Things were not moving at a very fast pace.  I then moved to 40m, 7059, and that was the secret place.  I managed another 18 or 19 in about 25 mins and then it just stopped.  So I packed up and headed home. 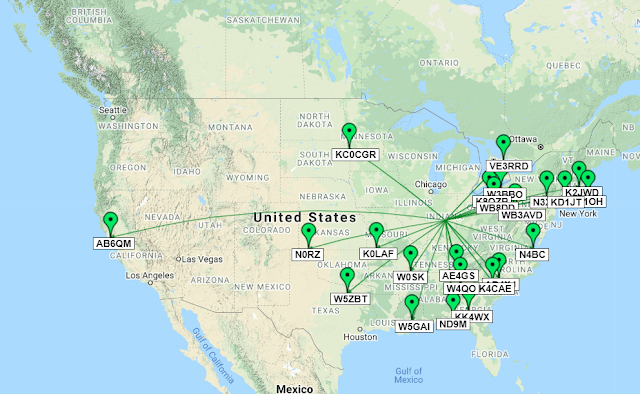 Since it was a bit early, I went through the area and did a bit of sight seeing.  Camp Atterbury is an Army Camp located next to the AFWA property, generally south of the park.  Back during WWII Camp Atterbury was a thriving city, with it's own hospital, grocery stores, movie theaters, and lots of barracks.  During WWII this Camp was used for several functions, one being a training camp for the infantry headed to the European theater, another was the Camp served as an internment camp, or POW camp where we housed Italian and German prisoners of war. 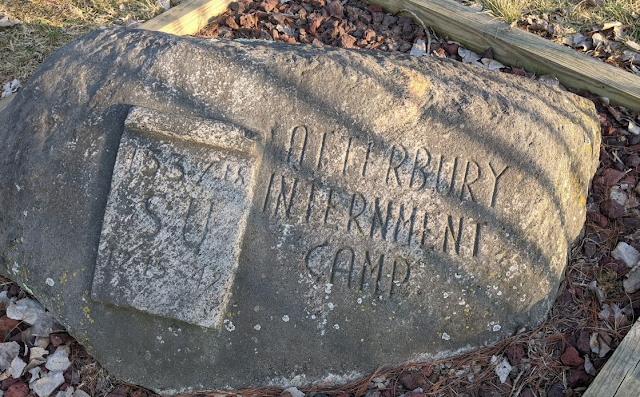 Today the DNR was doing measured burns of a lot of the grassy fields in the AFWA, so the smell of smoke was everywhere, this was another reason I decided to cut out a little early.
One of the features of the AFWA area, is the Italian POW Chapel that was built by Italian POW's during their stay at Camp Atterbury.  The chapel was totally restored in the 1980's and is used by the Archdiocese of Indianapolis several times a year for memorial Mass, and other celebrations.  The POW's created hand painted fresco art on the interior walls and the ceiling of the chapel.  One story says they used their own blood mixed with certain paints to get the right reds and browns.
The chapel is normally locked up unless there is a Mass scheduled, this had to be done because of vandals that have tried to destroy this place.  The pictures below give you some idea of what is inside.  It's a very quiet and peaceful place. 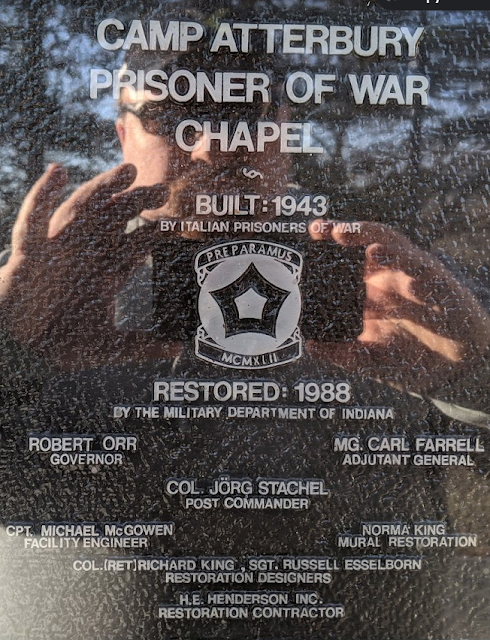 It is really a very neat place to visit and see for yourself.  If you ever get a chance to visit the Atterbury Fish and Wildlife area, don't miss seeing this.  It's just across the road from Stone Arch Lake, pictured below.
Well I can't wait to get out there again! Weather looks great all week so maybe Wednesday or Thursday night.
Best 73!
de KB9BVN
Posted by Brian KB9BVN at 8:15 PM 2 comments:
Email ThisBlogThis!Share to TwitterShare to FacebookShare to Pinterest
Newer Posts Older Posts Home
Subscribe to: Posts (Atom)