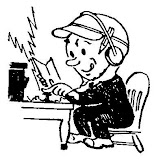 This year Field Day was really something new. With the COVID-19 issues across the nation, the ARRL made several rules changes and in my opinion, saved the event and made it a lot of fun.  I was pretty busy over the weekend but I did manage to get a few hours in.   Sunday was a big surprise in that 15m was wide open from my QTH to New England.  I was able to log 48 contacts total for my efforts but I also knocked out a few states for my WAS efforts.  I was also able to log a few more Parks on the Air sites as well.
My station was the Elecraft K2 at 5 watts, into my attic dipole.  I also had a LDG Z11 tuner that used to belong to Phil Wilcox WB8ABE.  Phil, unfortunately, is in hospice care now with Alzheimer's disease.  Best wishes and our prayers go out to his family during these trying times.  Phil proudly served his country in the United States Marine Corps, and worked for Western Electric in Ohio.  Phil loves Field Day, and running QRP CW with the Flying Pigs QRP Club International at our Field Day location in Caesar Creek State Park between Dayton and Cincinnati.

We have sure enjoyed some great Field Day gatherings.   This week I got my Eagle One vertical and the hitch mount for my SUV all put together, and I am planning on heading out to two parks this coming Friday, July 3rd.  I hope to activate K-4183 Atterbury Fish and Wildlife again, and then move over to the west and visit K-4215 Morgan-Monroe State Forestry.  I am going to be using my K2, LDG tuner, and the new Eagle One vertical for the maiden voyage.  I hope the weather cooperates, we had rain and storms almost the entire Field Day weekend here.
One other thing on the POTA front, I have qualified for the next Hunter Certification.  I am now a Silver Level Hunter! 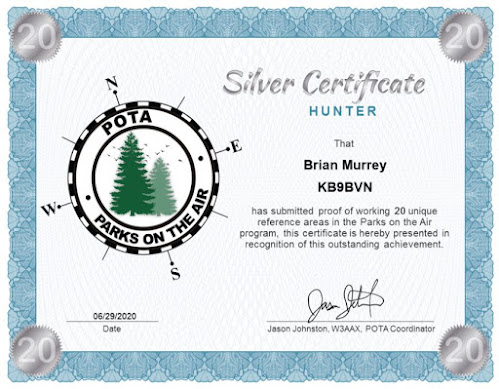 Well that's it for now, hope to hear you on the air, if you are able, give a listen for KB9BVN on Friday from the parks.  Will likely be working 20, 30, and 40m...go to the POTA spotting website and look for me!
73 de KB9BVN
Brian
Posted by Brian KB9BVN at 4:51 PM No comments:
Email ThisBlogThis!Share to TwitterShare to FacebookShare to Pinterest

POTA - Parks on the Air

Here it is June 2020,  so far we've survived COVID-19, adjusted to working at home instead of driving 74 miles a day to get to the office and back, cancellation of Four Days in May and just about every other hamfest that was supposed to happen this spring and summer...and maybe even into the fall, and I find I have been exposed to something that has brought a lot of fun back in to the ham radio hobby for me.
POTA, Parks on the Air, was started up after the ARRL National Parks on the Air events back in 2016.  POTA says, "This group was inspired by the outstanding work of Sean Kutzko (KX9X) and Norm Fusaro (W3IZ) from the American Radio Relay League (ARRL) in 2016." right on their website.
So about a week ago, my friends Ivin W9ILF, Wayne AC9HP, and Paul W9PDC talked me into going out and trying to activate a park with them.  I live about 20 minutes north of an eligible park so we decided to head there.
Atterbury Fish and Wildlife Area
Atterbury Fish & Wildlife Area is dedicated to providing quality hunting and fishing opportunities while maintaining 4,950 acres of upland game habitat, marsh, running creeks, and shallow impoundments.  This Park is known as K-4183 in POTA parlance.

Atterbury Fish & Wildlife Area was purchased by the state from Camp Atterbury, an army training installation established in 1942. In 1969, wildlife management efforts began on over 5,400 acres. The remaining military area, a training facility for the National Guard and Army Reserve units, coordinates with Atterbury Fish & Wildlife Area to authorize limited hunting on military property when not in conflict with training operations. In October of 2010, 1,250 acres were released to the Indiana National Guard in exchange for 1,990 acres of surplus land from the Indiana Department of Corrections in Putnam County, Indiana. Presently the property totals 4,950 acres.
Most revenues used in land acquisition, development, operation and maintenance of Atterbury Fish & Wildlife Area are derived from the sale of hunting, fishing and trapping licenses. Funds are also received from the federal Pittman-Robertson and Dingell-Johnson programs to aid fish and wildlife restoration. These funds are derived from taxes levied on sport hunting, shooting, and fishing equipment. Indiana hunters and fishermen are proud to provide this property for the enjoyment of all people.
So, POTA has two kinds of activities.  Today we were going to be Activators.  That means we would each setup in the Park and activate the park by making at least 10 contacts...ala Field Day.  So I setup on 30m using my Elecraft K1 I built in 2002, my Parkwood paddles I bought from Richard Meiss WB9LPU, and an end fed 30m antenna I borrowed from Ivin when I could not get my PAC 12 to tune up.  In about an hour or so I had 14 contacts, California to Florida.
Ivin W9ILF was set up using his Argo 5 on 30m with the same antenna I borrowed, running 5 watts CW, and he had his contacts done in about an hour as well.
Wayne AC9HP was breaking in a brand new LNR Mountaintopper 3 Band LCD radio, and a fantastic end fed antenna that Paul W9PDC had made for him.  This antenna worked on 10, 15, 20, and 40 meters with no tuner.  Wayne stayed on 20m and 4w of CW for his effort and knocked out his contacts in a little over an hour.
Paul W9PDC has a great QRO setup with his FT 891, his Wolf River Coil antenna, and a couple of radials.  He ran SSB on 40m and in about 2 hours he had over 100 contacts.
We started at about 9:30AM and by noon we were bug eaten, hot, and called it a day.  It was the most fun day I have had in a long time.
The other kind of POTA activity is being a Hunter.  That means you look for Parks on the Air to make contact with.  The POTA website has a great spotting page so when I am working at home I now have my K2 turn on and at the ready.  If I see a CW spot pop up, I go for it.  In my first week of hunting I have now logged 20 parks.  I just got an award for the first ten and I couldn't be more tickled. 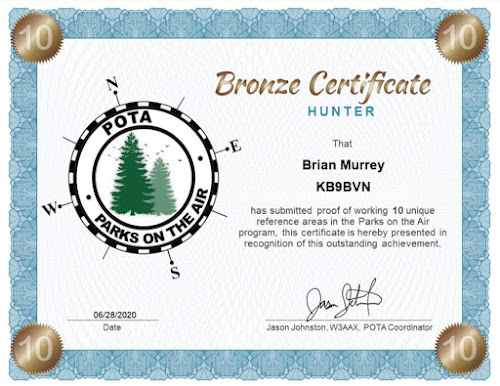 POTA offers tons of certificates and awards, so if you love the wall paper like I do, you're in for a big treat.
For my next outing I have two new antennas to try out.  I bought a Eagle One vertical with the hitch mount for my SUV.  Many of the POTA activators have had great luck with this antenna and I hope it can work out for me.  I plan on using it with my K2 or K1, my LDG Z11 antenna tuner, and my Parkwood paddles.
Another antenna I have now is a W9PDC end fed antenna...it's a 66 foot radiator and he took a few screenshots of the NanoVNA analysis.  feast your eyes on this.  Looks good on 10, 15, 20, and 40m with the attached UNUN.  This is what Wayne AC9HP was using with his Mountaintopper.  I can't wait to go and try it out. 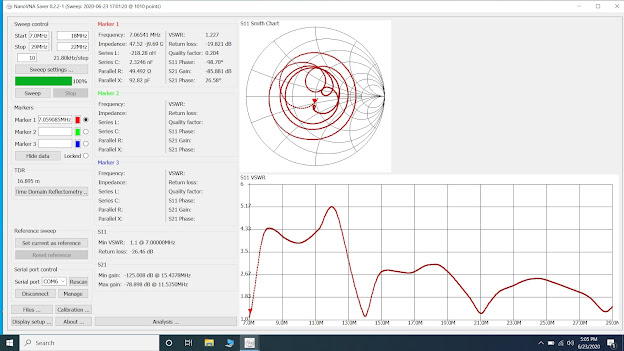 Well anyway, sorry I have been gone off the blog for a few months, we just had too many thing going on at once.  We've been blessed with another new grandson, Joe, and he makes 13.  We have another grandson coming in August as well....and playing with the grands is more fun than the Dayton hamfest!
73 de KB9BVN
Brian Murrey
Posted by Brian KB9BVN at 6:55 PM No comments:
Email ThisBlogThis!Share to TwitterShare to FacebookShare to Pinterest
Newer Posts Older Posts Home
Subscribe to: Posts (Atom)