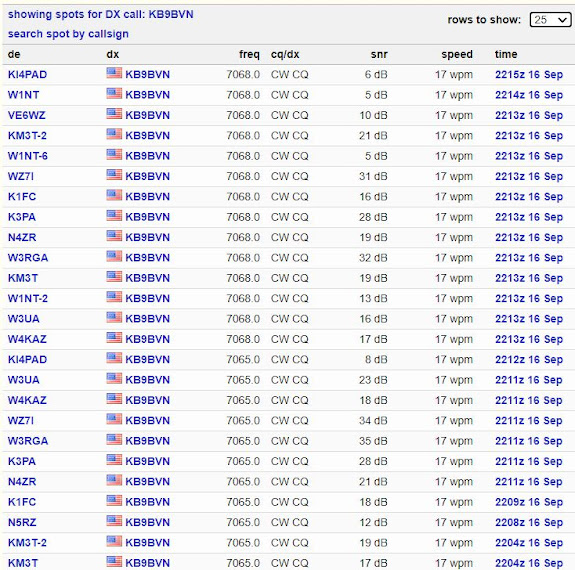 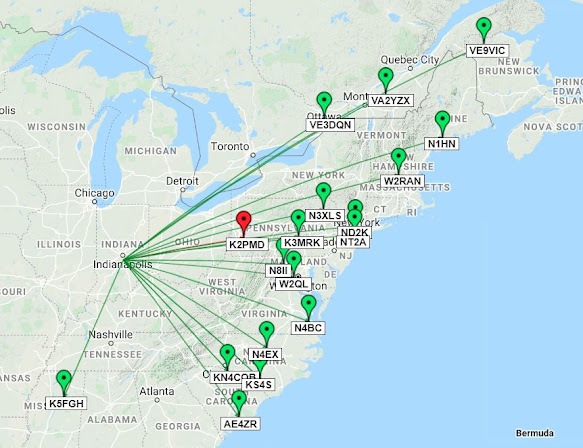 Anyway that's it for tonight, it was fun to make a quick run down to the park and activate it again.  This is my 6th activation of Atterbury Fish and Wildlife Area.  Four more and I think I get a certificate! Wall paper baby!
Best 73
de KB9BVN
Posted by Brian KB9BVN at 8:09 PM No comments:
Email ThisBlogThis!Share to TwitterShare to FacebookShare to Pinterest

About a week and a half ago I found out that I had earned the Arizona Agave Hunter Award from Parks on the Air.  This is for working (hunting) 100 different reference areas (parks). I started hunting on June 22nd of this year and it took me about 2 months to get 100 different parks in the logs.  I have the activators to thank as my contacts were all QRP.  94 were QRP CW and 6 were QRP SSB.  Some of these activators have bionic ears, and for that I am thankful. 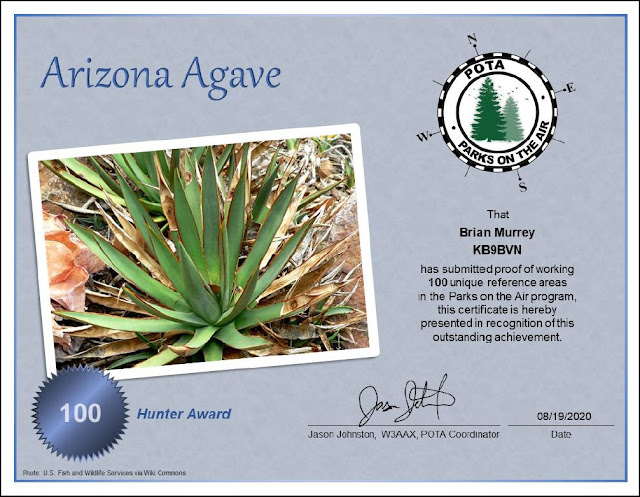 If I get time I am going to write up an article for the QRP Quarterly about working POTA successfully with QRP.  It's been a blast so far!

Best DX to all!

Posted by Brian KB9BVN at 3:24 PM No comments:
Email ThisBlogThis!Share to TwitterShare to FacebookShare to Pinterest

A Hunting I Will Go

I have been hunting POTA activators in my spare time for the last few days.   There seems to be a lot of interest in QRP operations on the POTA pages, so I thought I'd drop some stats here.  I run a K2 to a attic dipole for these contacts, SSB are red, and CW are green.  SSB is 10 watts, and CW is 5 watts.  Admittedly this is not a really great setup for getting on the air but I make do. 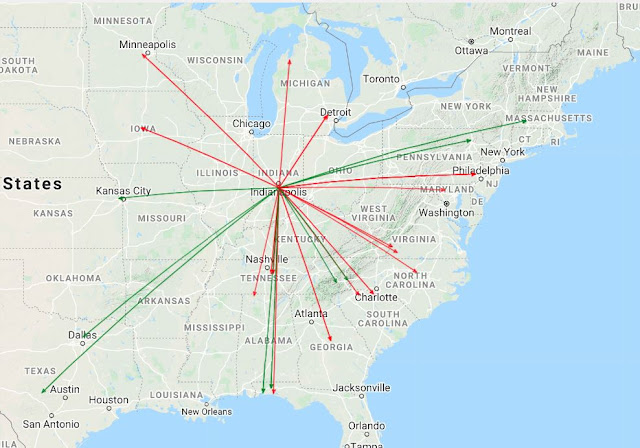 In the last couple days I have made 24 contacts, mainly just watching the POTA spotting page at https://pota.us - this page is updated every 60 seconds, so when a new activator gets on the air, RBN can spot them, or other hunters can spot them.   No super DX but I think this shows that QRP is a usable tool for hunting park activators.  Tomorrow I will be connecting my K1 back up and putting the K2 back in my POTA activator Apache case. I'll miss out on the SSB contacts with the K1.

Since June 22 I am now over 100 unique hunted parks, all QRP and almost all CW. 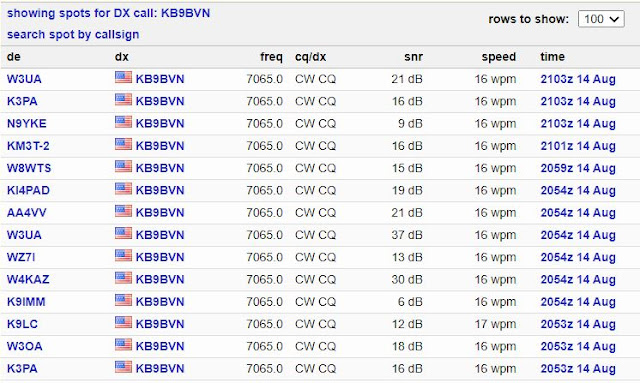 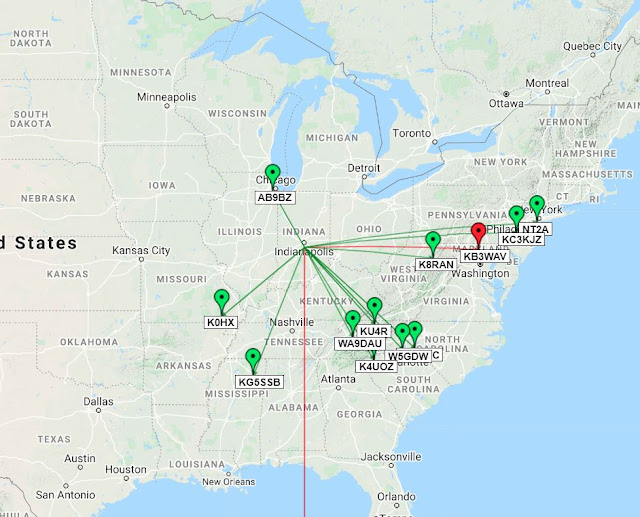 Posted by Brian KB9BVN at 2:25 PM No comments:
Email ThisBlogThis!Share to TwitterShare to FacebookShare to Pinterest

The Pig Out Sprint 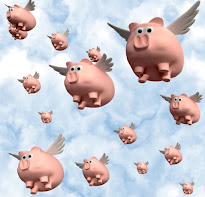 The day I had been waiting for finally arrived, Sunday July 26th was the day for the Pig Out Sprint.  This event was quickly put together by the Flying Pigs QRP Club International, and most of the heavy lifting was done by Diz W8DIZ, Paul K4FB (aka WF4FB), and Dan N8IE (aka W8PIG).  So the start time had arrived and I was going to operate outdoors so I could soak up the extra multi's...it was 92F in the shade, and not a breeze in sight.  I was using my K2, LDG Z11 tuner, and my Eagle One vertical mounted on the trailer hitch of my SUV.  Basically my POTA actication station.  By 3:30PM I was getting over heated and decided to shut down, pack up and move back to the house.  I made 5 contacts, the band conditions were dismal, with the A index hovering at 15.  It was a lot of fun though!
Also, today I got my Sapphire Hunter award from POTA, that means I have worked 75 different parks as a Hunter, all CW, and all QRP via my K1 and attic dipole at home.  The Activators must have bionic ears.  I have gotten RSTs from 229 to 599 while working on this one.  I really have to hand it to the guys in the parks for even hearing me.  I stated hunting on 06/23 so it took me right at 32 days to earn this award.  Not bad for QRP CW, if I say so myself.
73 de KB9BVN
Posted by Brian KB9BVN at 4:46 PM No comments:
Email ThisBlogThis!Share to TwitterShare to FacebookShare to Pinterest

So I am not on call this week, and I got the itch to go activate the Atterbury Fish and Wildlife Area again.  I have made a total of 71 contacts from there, all QRP CW.  So my goal was to get 29 more, an even 100, and then move on to another POTA park.  I had been chatting with Wayne AC9HP and talked him into joining me, even though it was an hour drive for him.  Once that POTA feeling gets in your DNA you're helpless against it.
So I checked the weather, we've been getting massive late afternoon pop up thunderstorms for the last few days.  I don't want to get stuck in a lightning storm. 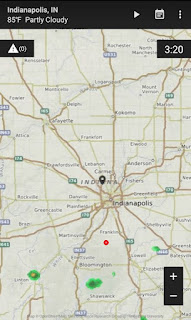 The red dot is about where the park is located, and we didn't see a threat on the local radar, so it was a go.
I made it to the site at about 5PM local (21:00Z) and started setting up, our favorite picnic table was totally available, so setup only took maybe 15 minutes.  I started out running CQ POTA on 30m, 10.120 Mhz and much to my surprise the first station I heard was Wayne AC9HP on the far west side of Indianapolis.
The band was not sounding too hot, but within 5 more minutes I had another contact, this time with Jim KK4BNC down in Georgia, and he gave me a 599 RST.  I kept calling CQ POTA for maybe another 20 minutes but nothing was being heard in my headset.   I was thinking maybe every one was on their way home from work or something...surely it wasn't my QRP signal.   Reluctantly I switch bands, and moved down to 40m and tuned up on 7.062 Mhz.  I spotted myself with the POTA spotting app on my phone and started calling CQ POTA.
I took a look at the reverse beacon report and this is what I saw:
Just as I thought.  The band had been going up and down all afternoon...
Even with the band conditions being less than optimal, I managed to get 21 more contacts in about 45 minutes.  I worked 16 states from Maine to Texas with my setup this evening.  AC9HP was my closest at about 50 miles and Dustin W1OPR and Robert NA5AR were my furthest at about 1000 Miles.
Wayne arrived at about 6:00PM, so I finished of a few more and went QRT.  Wayne then used my K2 and his newly acquired Vibrokeyer to go for an activation as well. 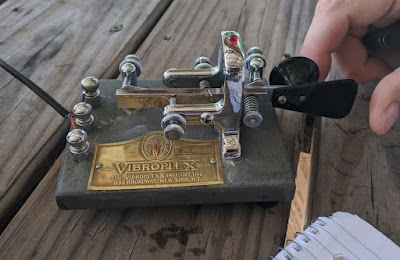 Wayne was able to get about 20 more contacts in the next hour or so, the band started to improve as the hour got later.  He was ACTIVATED!
I ended up with 23 contacts...I am 6 short of the 100 I was targeting from this park.  So I will make one more trip maybe this weekend to knock those out and then my activations will be from another park in Indiana.
POTA has been a lot of fun for me, I have made 192 contacts in the last month, which is more contacts than I made in all of 2019.  It's brought a lot of fun back in to the hobby for me as I really enjoy taking the station portable.  I earned my 50 Park Diamond Hunter Award a week or so ago. The next level is Sapphire Hunter and you need 75 UNIQUE parks hunted.  I am sitting at 72 right now. 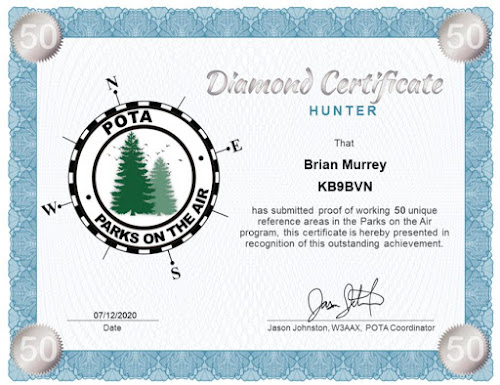 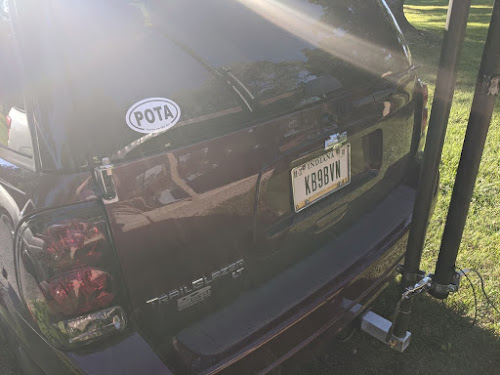 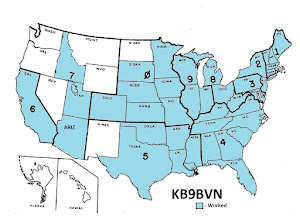