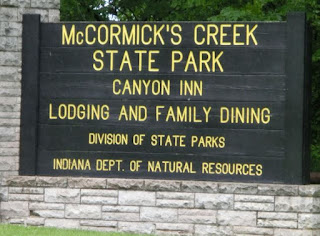 Last weekend Wayne AC9HP and I got up early on Sunday morning and headed to McCormick's Creek State Park to do a POTA park activation.  The day was perfect, sunny, clear, slight breeze and temperatures in the mid to upper 70's.  This park is about an hour and twenty minutes from my home QTH, and is one of the most popular state parks in Indiana.

Founded in 1916, this is Indiana's first state park, and it is rich in geological treasures.  This part of the state was at one time part of an ancient shallow sea, and the stopping spot for glaciers that brought down granite from Canada.  There are several caves on the property, as well as sink holes, and fossils to be examined by the park visitors.  The most notable feature in the park is the waterfall on McCormick's Creek as it races toward the west fork of the White River.

We arrived at about 9AM and stopped at the Canyon Inn for breakfast.  Let me warn you in advance about the Canyon Inn.  This is the Inn  that is in the state park.  The state subcontracts the management and services of the Inn.  The Inn used to be a Sanitarium that folks would come visit and stay for the mineral waters, springs, and fresh air.  So the rooms are very small. The prices are very high. 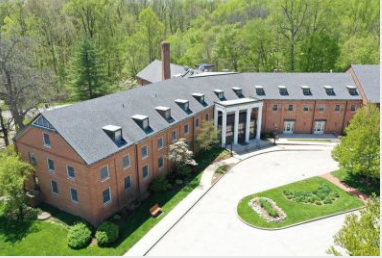 We had breakfast in the dining room, mainly because it was convenient.  Two eggs, one biscuit, two slices of bacon, and about a half cup of French fried potatoes (they tried to pass the fries off as potatoes O'Brien), and no coffee cost almost $13.00, being a tight fisted ham, notorious for being cheap, I was aghast...but we ate it, it was good, it was hot, and the waitress was very nice.  When the state ran things here 25 years ago, you could stay here for about $35 a night, now it's more like $170 a night. We did not stay here, we were just visiting for the day.

I sat up my operations from the parking lot of the Deer Run shelter area.  I had enough coax with me to mount the Eagle One antenna to my SUV and then run the cabling over to a conveniently located picnic table, in the shade.  It was a very peaceful location, virtually no drive by traffic, and no other folks within earshot or eyesight.  Wayne sat up his operation about 100 yards away, he was using his IC-705 and end fed antenna.  We both operate QRP.

The bands were mostly up and down and the QSB on 20m was slow and steady.  Florida stations would be booming in and then within 10 minutes, they'd be gone...then 10 more minutes they'd be back.  It was a little frustrating.  My K2 was pushing about 10 watts to the vertical, and I was able to get my first 10 contacts in about 35 minutes.  20m was doing well at first and then it fizzled a bit so I finished up on 40m.  KC4HCH was at a park down in Alabama, so he was my only Park to Park contact on this outing. 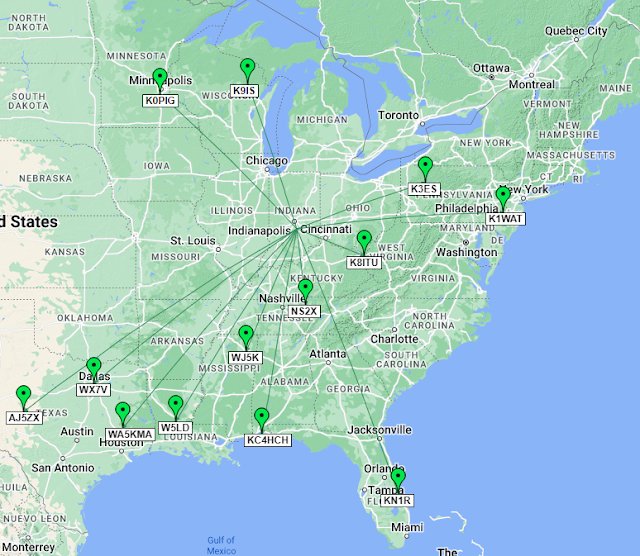 Posted by Brian KB9BVN at 8:16 AM No comments:
Email ThisBlogThis!Share to TwitterShare to FacebookShare to Pinterest
Newer Posts Older Posts Home
Subscribe to: Posts (Atom)