Winter is here...time to QSO!

Not much on TV today, it's nice out, for December 3rd, and the Colts are losing again...what to do?  So I fired up the K2 and got tuned up on 7042 and started calling CQ at 5w with the attic dipole.  After about 20 mins of not getting any answers I checked the reverse beacon network and I was definitely getting out.

Finally I got a call from Gary AD4EV down in Hays North Carolina.  Not a new state but a welcomed QSO.  Gary was running a Ten Tec rig at 20 watts into a windom, we traded 579's and the QSB was moderate.  Hays is a small town of about 1800 located in north western North Carolina in Wilkes County very close to the Great Smoky Mountains.  Thanks for the QSO Gary!


Next up was Mike KD2WX up in Hilton New York.   Mike has been licensed for about a year, and has moved up the ranks from technician to Extra class.  He is a new CW operator but let me tell you this, his fist was good copy here in Central Indiana.  Mike is a software engineer for an aerospace company. Hilton NY is a village that is inside the town of Parma NY in Monroe County, and is known as "The Little Village with the Big Heart".  Mike was on his Kenwood 590S and using a dipole antenna. Thanks for the QSO Mike!

Then I was called by Bill KG4FXG from down in Lawrenceville, GA.  Bill was using his Kenwood TS 570S  and a long wire for an antenna.  Bill is also into QRP and has a K1, and OHR 500 and enjoys kit building.  He's also a CPA!  Bill is a regular and often serves as NCS on the Georgia Training Net every night at 9PM eastern,  on the frequency of 3549 Khz.  I could have talked to Bill for hours but I had to QRT and tend to the wishes of "She Who Must Be Obeyed".  Things were just getting interesting too, I love talking to fellow QRPers. It's been a relaxing Sunday afternoon on the radio.   Thanks for the QSO Bill! 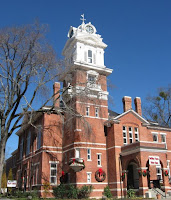 Lawrenceville GA is the county seat to Gwinnett County.  Founded in 1821 by the Georgia General Assembly, Lawrenceville has survived the Civil War and has grown to become an important suburb of Atlanta.  The city is named after Commodore James Lawrence, commander of the frigate Chesapeake during the War of 1812. Lawrence, a native of New Jersey, is probably best known today for his dying command, "Don't give up the ship!" William Maltbie, the town's first postmaster, suggested the name of "Lawrenceville". So there you have it.  Also, you might recognize the name Oliver Hardy, he was half of the Laurel and Hardy comedy duo, and he was from Lawrenceville GA.

That was pretty much it for the day, I have also been working on my Norcal 40A parts gathering phase so I can start building this new kit soon.  Chuck Adams K7QO and the guys at qrptech have done a great job with this project.  I can not wait to get mine on the air.

Posted by Brian KB9BVN at 5:14 PM
Email ThisBlogThis!Share to TwitterShare to FacebookShare to Pinterest